Well, this was fun! Sort of. Not good but you know, entertaining if you don't mind not thinking too much about things. If you think too much you might not even think it was fun. I think I've changed my mind now. It wasn't great at all. 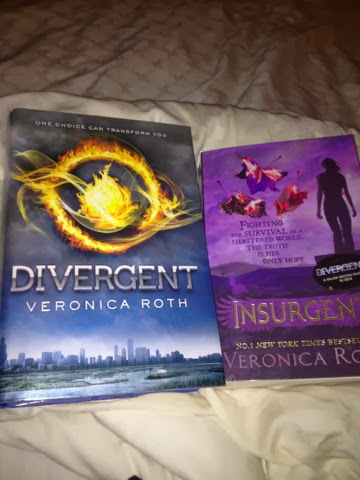 Please gaze ecstatically upon these library books upon my lap in my bed just before me nodding off. Can I take a picture or what, what.

So, teen dystopia. Fabulous genre. These books, well the first one for starters, are being filmed now (as you can see if you've got good eyesight and can make out the print on that little black sticker on the right-hand book). Because teen dystopia is Hot. Sizzling even. I borrowed Divergent because it's on the list I wrote about with books you have to read before they're filmed. It's one of the most popular ones so it took a while for the library to give it to me. Then I read it and thought ok, pretty fun, so I borrowed Insurgent too. But then I got bored so I've read the synopsis for part three, Allegiant, on Wikipedia and I'm alright with that, thanks.

Divergent is often compared, I’ve noticed, to The Hunger Games, reasons presumably being a sixteen-year-old girl as main character, a first person narrative, that it’s based in the US (more specifically in Divergent, in a future, ravaged version of Chicago, populated by only a fraction of the current population) after somthing cataclysmic has happened to destroy society as we know it now, and, most importantly, that a bunch of teens spend a lot of time fighting bloodily against each other in a large part of the book. However, where THG has a very clear message about the horror of violence as entertainment, how violence desensitizes and violates both victims and aggressors, about living under an oppressive government and how even a person of some resources is never free in a dictatorship, Divergent has a message of … well… I dunno. Sex? Because honestly, there’s a lot of ogling going on. Nothing happens beyond petting (it’s all a bit Twilight without the obvious preaching, and I can’t help wondering about that since her acknowledgments at the end of the book start with a big thank you to God. Which makes me, a secular sort of Catholic, squirm more than a bit), but oh boy are we ever obsessed with the taut young adolescent male physique. The strip of skin between his t-shirt and his trousers. His tattoos stretched over his muscles, blah blah blah. Drowning in his eyes. Pressing of lips. Hands on curve of hips and melting sensation in stomach. All the while he is eighteen and she sixteen which, although not Twilight standard, still means that any sex is statutory rape if consummated. But never mind that. I’m Swedish and we have a more laissez-faire attitude to teens having sex after all; it’s mostly the adult woman clearly revelling in the hotness of the teen bod that is a bit disturbing. I had a rant half written out about how weird it is that a presumably middle-aged or so woman is leering over young men like this but then I looked Veronica Roth up and she's born in 1988 which makes her ... math is hard ... not so old as too make the idea of sexing an eighteen-year-old revolting. Not that I judge. Much. However, I betcha it goes down well in the target audience. I wonder though if it doesn’t become more a girl book than a unisex book? Also, nuclear family FTW? Is that a message? I think that ”it’s not really good to kick ass but it sure looks cool” is a sort of message too. And "tattoos are cool and Have Meaning and people who have tattoos aren't necessarily bad people you know". It's all very "I just discovered MTV" in 1991 or so.

I’m being facetious. Albeit with a heavy hand Roth wants to tell us that selflessness and bravery are good values and often amount to the same thing. How true courage is about being able to say you’re afraid and to stand up to peer pressure. Stuff like that. I just don't think it's very well done. She's a sort of competent writer (especially for her age) but not very original and a bit messy. Her writing is very sparse and brief (which fits the general emo moping mood) so you'd be excused for mistaking the style for clarity of thought. Her plot lines and entire secondary universe, however, lacks structure and cohesion, in my opinion. If you think about it, it's just not that believable.

One of my big issues with the books are that Roth is clearly incapable of truly imagining a world with different values than the one she lives in. You therefore have an unspecified future, after society has been turned upside down by wars and other horrors - but basic male-female gender roles of contemporary America remain the same, for example. Which means that her attitude to sex sucks. You might think – and I think she thinks -  that she is sex-positive, since she acknowledges sexual desire. It is however clear that to her abstinence is a virtue. Tris and Four can indulge in some heavy groping and then stop, and the only reason for them stopping seems to be that it isn’t right to do the sex. And there is no forthcoming explanation for why it isn’t right. And I’m not going to swear to it because I didn’t keep count or anything, but I do believe that the shifting is interrupted by Tris, who takes a deep breath and pulls down her t-shirt past her hips again, like. Now, I’m all for her backing out of sex if she loses the hots, and I would have gone whoop-whoop if that is what happened, but it’s not. She (and Four, who is a Good Guy you see and Respectful) backs off by exercising self-control. Which I can also be fine with but I’d appreciate some reasoning behind why this is important. Otherwise, the message is that sure, you get all hot and bothered and shift like mad but don’t go all the way girl, and most importantly, girl. This is not sex-positive. Fundamentally the idea that a promiscuous woman is a slut remains, a morality not at all so definite when it comes to men. Anyway, gender roles and views on sex were not the only examples I had of Roth's lack of imagination, but it'll have to do for now. Mostly because after a while I got a really icky feeling off it, like this book truly could have a negative impact on young people because it's so insidious.

That said, the two youngsters maybe do the deed in Insurgent,  the second book. But it’s a bit Asimov (I haven’t read Asimov really. But my husband told me once that he is meticulous about not writing sex scenes. Instead the two approach each other, and then new paragraph and ”Afterwards …”) so I’m not sure.

Right, this post has been sitting here for a month now I think without being posted, waiting for me to wrap up with something smart. Since that's not gonna happen I'll publish now. Oh, I'm obviously going to see the film - I'm not proud, also I'm a hypocrite. But I'll wait until it hits the television.