These are also from the list of the soon to be filmed. Quite popular books too, took a while for them to work their way down to me from other library aficionados, but then they showed up at the same time. 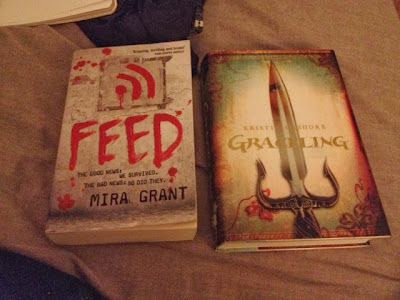 Another cracking photo of my bed, I really do spoil my readers.

I quite liked Graceling. I didn't fall head over heels for the characters, but close. It lacked a little fleshing-out somehow. But it's a decent fantasy novel with a decent secondary universe, and towards the end when the plot was coming together it was genuinely exciting too. A good amount of violence, just there because the world is a violent place; a very excellent feminist theme and a great heroine. I put in reservations for the other two books in the not-really-a-series and am looking forward to it. Feed was not as much my cup of tea at all. I like that it's a zombie book without focusing on the zombie gore. Instead it's about how humans are living after the disaster. The medical side of it is well-crafted. Everyone is infected with the dormant virus and will reanimate after death or after being bitten/otherwise exposed to the live version. This is very realistic, a nice touch. I just found the whole thing a little too Aaron Sorkiny, it became a mix of The West Wing and Newsroom and just a bit too snappy. Despite every opportunity to make me care about the characters they faded into the background and became accessories to the one-liners and the technology. I don't think I'll read the others in the series, even though they apparently are better ( even better if you're a fan).