Ngaio Marsh: Scales of Justice and Hand in Glove

Let’s go on with two entries that have been (empty) on my draft list since 25 of June this year. I bought a stack of Ngaio books, as you may recall, and of course read them a long time ago. I’ve been putting off blogging about this because I wanted to have the covers in the post too, and I’d scanned them at work (norty norty), and I had to e-mail them to myself, and then remember that I’d done so … clearly this sank on my list of priorities.

The problem is that now I’m very hazy on the details. I do remember that Scales of Justice surprised me by introducing a rift between the mandatory young couple (who are above suspicion). They will without a doubt marry after the book is ended, but perhaps not live quite as happily ever after as all of Ngaio’s other young couples. But hey, don’t take my word for it, have a look at the section in question, which I’m delighted that I found again (not often that happens):

It's the passage in the middle, especially.

Colonel Cartarette has been murdered, and beside his corpse lay a trout, and it is the remnants of scales from the trout that will bring the killer to justice – gettit? In this tiny, seemingly improbably idyllic village with almost incestuously cosy relationships there is a lot of tension under the surface and a lot of suspects.

I did like this one, Ngaio puts up a good show here. Of course, fabulous cover art: 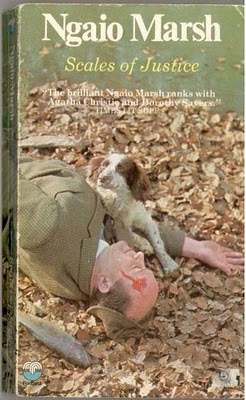 Hand in Glove does not have such wonderful cover art. This is the odd one out in my recent little collection: 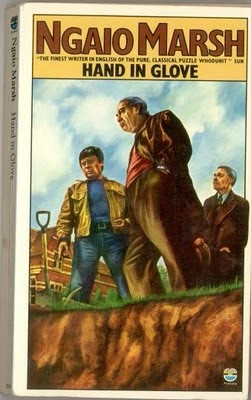 It’s also falling to bits, so I did waver before buying it. In the village/small town of Codling mr Pyke Period, a man obsessed with etiquette and class, both subjects that are less and less in demand (the book was first printed in 1962). His house-mate, mr Howard Cartell, is found dead in a sewer ditch that is being dug right outside their house, on the morning after a tremendous party thrown by Cartell’s ex-wife. The party featured a cross-country scavenger hunt, which meant that all the suspects have opportunity, of course.

It’s not really one of my favourites, but it’s quite interesting to read how Ngaio tries to incorporate a certain type of loose-moraled, modern, wicked young person, a type that would previously not have been accepted into this kind of society. Gives you a certain feel for the times. Oh, and the young couple are quite charming.
Posted by bani at Tuesday, August 24, 2010