Two covers to make you quake 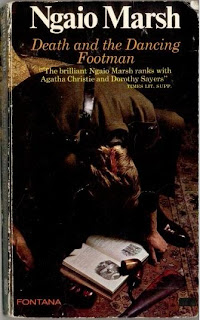 Scanners FTW. Here are the covers for Death and the Dancing Footman and Vintage Murder. For the former, one has to ask oneself how long the poor model was forced to sit in that position before the photograph was deemed perfect. "Just a little longer Gerry, we're almost done. No, you shouldn't have had that extra pork pie for your lunch, I agree, and definitely not the two pints. But that's not my fault now, is it? Alright everyone, take two minutes so Gerry can loosen his belt a little. Trudy, could you dab on some extra blood there on the back of his head? Thanks love. Careful, don't step on the pipe!"

And isn't Vintage Murder just too spectacularly tacky? Blood splattered on the snowy white table cloth, I ask you. It looks more like the head waiter has been bludgeoned to death by a disgruntled diner than anything else.

And then someone brought in a three-year-old who had just had a jam sandwich and let him wipe his fingers on the dead man's shirt. 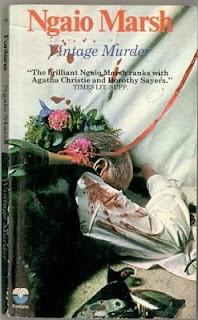 Ah, these covers are brilliant! They remind me of our mother's books as the covers are from the same era. I remember asking her one day why she always read books with naked women on the covers. She got in a bit of a huff over that... wonder why...:-)

Btw, you'd love this weeks local paper. Apparently a local GAA lad has appeared in a porno (british of course, but filmed in Ireland) and now all has been revealed and he has been ostracized. His family is shamed, he is shamed, he has been kicked out of the GAA and his father has publicly apologised for the behaviour of his son. Oh, and his lanscape gardening business is ruined too! The best bit is where they quote the lad in the paper saying that his life is ruined, no Irish girl will ever go on a date with him ever again. Priceless. This story took up 4 whole pages in the local paper, big scandal. And he's the cousin of one of my closest friend's sister-in-law, so I practically know him too *s*.

Nah, that would have been too brilliant for words. It was filmed in a caravan, think the film is called "Tanya does Ireland" or something similar ;-). There's a screenshot of him from the film in the paper where he's knocking on the caravan door...