Ngaoi Marsh: Death at the Bar 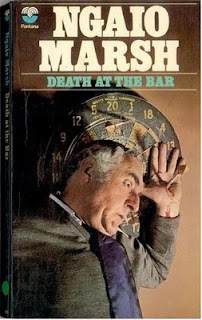 There is a bookmark in this book, well, a business card from my pilates teacher, and on it I've scribbled "p 100 12 o'clock?" which is a reminder to myself to mention this when writing. However, page 100 in Death at the Bar mentions nothing about clocks, so I remembered that actually the reminder belonged to Overture to Death. I think. I haven't got the book here at work (from whence I'm furtively blogging) so I can't check. The note was to remind me of a mistake - Alleyn and Fox get to their inn after a hard night's work, at the crack of dawn, and mention that it's 12 o'clock. Something like that. So there you are. Pulp fiction fault I suppose.

Now, pulp indeed, feast your eyes on the cover to your left above on your left. A cover that, incidentally, is also wrong. The man who dies is not a middle-aged fellow whose eyelids have been glued to stay open - no, the man who dies is a young brilliant lawyer. Here you can note the title's pun - the bar, gettit?
Sorry for the spoiler, but hey. This annoys me a little, I have to admit. Even though it strenghtens my theory that they had a certain selection of people who posed for these covers and there was no young handsome man among those.

The story is that three men, an extraordinarily gorgeous actor (Parish), his cousin, a brilliant lawyer (Watchman), and their friend who is an earnest and talented painter (Cubitt) (no prizes for guessing who is the best man among them) have a tradition of holidaying in a small fishing village in Devon, a village with the curious and isolating feature of being virtually hidden behind a stretch of cliffs and only accessible through a tunnel through the mountain (unless you approach by sea, of course). This time when they arrive they find a new-comer, a slightly odd man who is a wizard at darts and who has rapidly risen to the position of secretary and treasurer in the local Communist party. Watchman starts behaving strangely towards this man and appears to wish to provoke him. After a drinking session he challenges the newcomer to throw darts between his fingers - a party trick that the newcomer has demonstrated earlier. This time he misses, and Watchman receives a minor injury (minor, not crucifixion as the cover implies). Within minutes he is dead - was the dart poisoned?

There are a few twists here which make it rather fun, but the most interesting aspects of this book are class and gender. Class - in the background is the Communist party, staunchly defended and supported by the pub-owner's son, whereas the pub-owner himself is a roaring Tory. A local young woman has been given a university education and is now trapped between her background and what she has become. To her the Communist party promises egality, but it's clear that she thinks only in matter of class, really. When Watchman sexually assaults her she dismisses it as "nothing, nothing she couldn't handle". In a sad echo of one of the Soviet Union's big equality failures and hypocrisy wins she isn't aware of any feminist theories on patriarchal power, instead pretty much takes the blame herself.

Also, I wonder if the distinction between public and private bars exists anymore in the UK? Would be interesting to see.
Posted by bani at Tuesday, June 08, 2010