Oh, dramatic isn't it? And I've just been taught how to scan something on the printer and get a jpeg file, so for your viewing pleasure: 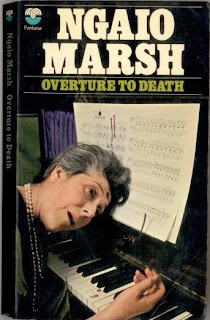 Isn't it fantastic? Who is the woman posing? Was it a full-time or a part-time job? Inquisitive minds are dying to know. There is no information inside the book incidentally, none at all. This is functional art at its ... well, not best. Most lurid? I must get the other ones scanned too.
First published in 1939, it's set in a small village where the small society group in residence - the squire, his son, the squire's spinster cousin, the rector and his daughter (in love with the young squire-to-be), the doctor, the enigmatic single newcomer (also the doctor's lover) and the first, original parish spinster - decide to set up a play to raise funds for charity. The two spinsters are best friends and bitterest rivals, both constantly struggling to be the most important and most valuable lady-in-charge in the community, and both hopelessly in love with the handsome rector. Miss Idris Campanula is used to being the boss of everything, bullying herself onto committees and into first position always. When Miss Eleanor Prentice came to live with her cousin she used her gentler ways of manipulation to coax her way into the local petty positions of power, usurping Idris. With gossip and religious hypocrisy as the glue of their friendship they nevertheless get along by default. Miss Prentice is all set to play the music score for the play. When her finger is injured Miss Campanula jumps at the job, only to have her gloating self shot on premiere night (see illustration) by the booby-trapped piano. So, enter Alleyn and Fox. Also, bloody Nigel (sigh). Whodunnit?

Actually, it's obvious whodunnit almost from the beginning. I still enjoyed it though. There are some great Alleyn quotes in it, which I can't be bothered to look for at the moment. Ah well. It's interesting as an attempt at psychology, which must have been all the rage at the time because there are numerous references to this suspect "science". The crime is resolved after a show-down of the classic kind, with all the involved gathered back at the stage. Now, she cops out here Marsh does, because she resorts to this lame solution and tries to cover it up by having Alleyn very annoyed at having to use it - yet he does, so whatever. Also interesting is a general air of the times, a break between Victorian morality (the spinsters) and young, carefree (but not premarital) love.
Posted by bani at Saturday, June 05, 2010