John Dickson Carr: The Problem of the Green Capsule

Now THIS is a second-hand find! This is what I look for when I'm in charity shops, not any fecking Jeffery Deaver. The condition of this book is atrocious. It's an extremely cheap copy from 1956 (the book was first printed in -39) with rather magnificent cover art. And on the spur of the moment, since I happen to have time, I give you a picture. 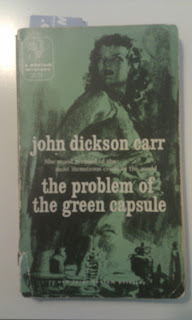 Not a GOOD picture, mind. Don't get greedy. Isn't it superb? Anyway, all the pages start to come off the broken, torn spine whenever I turned the page, so we'll see how long it survives in my careless household.

The crime of the book is murder by poison. Very tragically the first murder is completely random -   poisoned chocolates are introduced into the local shop's countertop selection, eventually causing several children to be poisoned, with one fatality. Psychology plays a large part in the discussion and solution of this mystery - the psychology of witness perception and the mental setup of a poisoner, specifically men who poison. The analysis is remarkably modern, if I remember my popular psychology correctly:

"But the men are a more uneasy menace to society, since to the slyness of poisoning they add a kind of devilish generalship, an application of business principles, a will to make good by the use of aresnic or strychnine. [ ... ] First of all they are usually men of some imagination, education and even culture." [ ... ] "Now,", pursued Dr Fell, "what is the first most outstanding characteristic of the poisoner? It is this. Among his friends he usually has the reputation of being a thoroughly good fellow. He is a jovial soul. An open-handed companion. A real sport. Sometimes he may display slight Puritanical scruples, about strict religious observance or even good form socially; but his boon-companions can easily forgive him for this because he is such a decent sort."  [ ... ] "Whereas actually there is in their characters, as a reverse side to the same picture and perhaps an essential part of it, such a blind indifference to the pain of others - such a cool doling-out of death in its most horrible forms - that our ordinary imaginations cannot grasp it.  [ ... ] it really does express the attitude of the poisoner towards human life. Wainewright had to have money, so (obviously) someone had to die. Wiliam Palmer needed money to bet on horses, and so it became clear that his wife, his brother, and his friends must be given strychnine. It was a self-evident proposition. And it is also true in the case of those who blandly or even plaintively 'have to have something'.  [ ... ] and he gained only a few thousands by killing his wife's mother. But he wished to be free. He 'had to have it'. Which brings us to the poisoner's next characteristic; his inordinate vanity. All murderers have it. But the poisoner possesses it to a bloated degree. He is vain of his intelligence, vain of his looks, touched with the bruch of the actor, even the exhibitionist; and as a rule he is a very good actor indeed.  [ ... ]And nowhere does the male poisoner's vanity more clearly express itself than in his power - or what he thinks is his power - over women. "

Dr Fell's lecture is much longer of course (you can see I've abbreviated it), and I think he's describing what we today would call a psychopath. The inability to feel empathy. The vanity - except we don't call it vanity these days when vanity is no sin. It's very good.

Another part that jolted me a little was a throwaway comment after the young woman suspected by the town of benig guilty has just had a stone thrown at her through a shop window. At the idea of her not being able to walk freely Detective-Inspector Elliot (who, sadly, has a Scottish volatile temper leading him to "growl" a lot - I ask you) says what! are they in Germany? are they a bunch of Non-Aryans cooped up in a citadel? - which is one of those little throw-away comments that shows that the rest of Europe knew oh perfectly well what was going on in Germany in the 30s. No-one can claim ignorance if you can reference persecution in a detective story.

God, now I'm back on the vintage horse, my dears. I need more. Perhaps perhaps I should commit to some internet shopping.