I’m not sure why the previous owner (TPO) poked a hole through the cover and first finger-width of pages of my second-hand copy (see picture after the jump). Did he or she feel a burning urge to try to drive a nail through a paperback, but then give up? Was it a tragic accident? Did TPO really hate it? Hate hats? 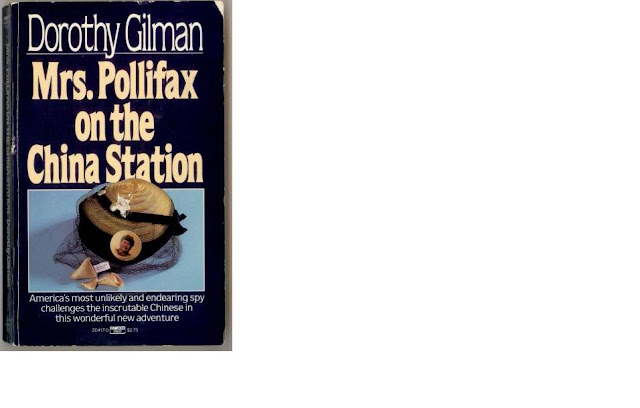 Luckily the hole does not make it impossible to read, unluckily the price wasn’t specially adjusted to reflect the condition of the copy. Cheapskates. And I, sucker that I am, was all too ready to be fooled. Because despite the blatant propaganda that the mrs Pollifax novels are, they are somehow quite endearing.

This one is written around the time that the US was warming up to China, which is also when the excellent film Big Bird Goes to China was made, one of my favourite films ever when I was little. We were among the first to own a VHS and we had this film recorded off the telly. The tape was one of the early, heavier ones, and for a long long time we had it there, among gradually newer and flimisier VHS tapes, and we watched it at least once a year. And I think I found it when the girls were small, I think I tried showing it to them. But now I don’t know where it is. Anyway, from China being Very Evil Indeed we have abruptly gone to China Having Evil Government But Ancient Venerable Culture And Chinese People Sadly Oppressed And Deserving Respect. Which doesn’t quite trip off the tongue the same way, and the machinery behind the whole attitude change is about a subtle as tumbling towers of empty cans, or even better, as subtle as when Breznjev denounced Stalin, maybe. I like that political comparison even better.

So mrs Pollifax gets recruited to go to China, ostensibly on a guided trip with a group of other, civilian and ordinary, Americans. Once in China she is to make contact with a Chinese man who has escaped a prison camp and get information from him on the location of said camp, and after that she is to pass it on to her co-agent in the tour group, whose identity will then be revealed to her. And then he is to somehow find one of the prisoners and smuggle him out.

There are allusions to some dirty, rotten scoundrels in the world of espionage, but on the whole we are asked to believe in a CIA that’s honest, up-front (but secret!) and most importantly – honourable. At least mrs Pollifax and her co-agent are, which is enough for us. If you don’t mind a rather naïve and idealistic view on the Cold War and US foreign policies, the book is a perfect spy thriller of the comfort food variety – the tempo is slow, the characters limited, the natives viewed with a benevolent eye. Optimistic, fundamentally. The absolute weakest part was an over-enthusiastic foray into the spiritual side of things with one tour group member revealed to be psychic (yes, really), and being able to sense the anguish that has once taken place when for example standing on an historical battle field. Why on earth does the rediscovery of the Silk Road and the yin-yang symbol lead to such flights of fancy?

By no means great literature, but easy reading, and I’ve certainly read worse and miles more pretentious, to boot.
Posted by bani at Monday, October 04, 2010

Email ThisBlogThis!Share to TwitterShare to FacebookShare to Pinterest
Labels cover art, crime fiction, Dorothy Gilman, how much? oh such much...