Ngaoi Marsh: Off With His Head

This is the one I wanted to write about for midsummer, seeing as how it was about Morris dancing and all. Morris dancing is apparently not a vaguely silly, quaint dance, but an ancient ritual with a lot of deeper meaning. In this case, the dance (our Dame writes in the foreword that she's freely mashed together a few different ones in the name of fiction) shows the ritual death of the Fool, who then is resurrected. I forget the word for this, but you know - it keeps the world going for another year, that type of thing?

This dance takes place in the middle of winter in a small village that has stuck to the old ways in this respect, and that has succeeded in keeping out the tourists and others who might gawk at their customs instead of participating. Sword Wednesday is a big deal, and the primary part of the fool has been performed by the old smith Andersen for many years. His five sons too dance, and even this is part of the ritual. This time as usual they mime beheading the fool, but when it is time for him to be resurrected he lies there dead, his head away from his body. Who has beheaded him under the eyes of all the spectators at the dance?

And the cover? Well friends, it is not a folkloristic, pagan fool we see, no siree. This one wins the awful cover competition hands down and head off, all categories, all prizes. If you weren't afraid of clowns before, you will be now. 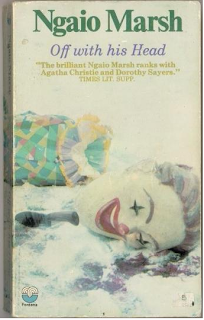