Fire and Bitterblue by Kristen Cashore 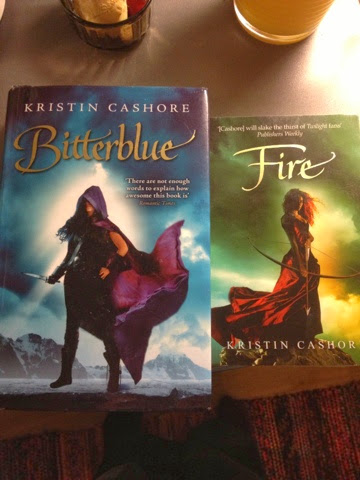 The second and  third part of the Graceling  series had to be read of course. My eldest daughter lolled and lolled at the covers of Fire and Graceling, which show the silhouettes of beautiful lithe girls ready to shoot arrows or something. Pretty lame, and they don’t really do the books justice. Somewhere on the internet someone has written something intelligent about this pervasive image of strong girls with bows or crossbows - as in, without one you're not strong, and you can't be strong in any other way. I don’t think these books are fantastic by any means, but they are, on the whole, well written and imaginative, with a strong ambition to discuss more difficult subjects – like how to forgive people who have been coerced to commit terrible acts of violence under an oppressive regime, with definite nods to the South African truth commissions (Bitterblue), or if a person whose parent was violent and tyrannical has a duty to atone for said parent, or a right to atone (Fire). The covers, however, are just pretty and shallow and kick-ass; elements that exist in the books, but aren't the most important by any means. The stories are darker than you'd imagine, but in my opinion they could have gone a little darker yet, and more philosophical.

Anything else I wanted to say I've long forgotten (this is another overdue draft being finished).