Catherynne Valente: The Girl Who Fell Beneath Fairyland and Led the Revels There

After the glowing recommendation below 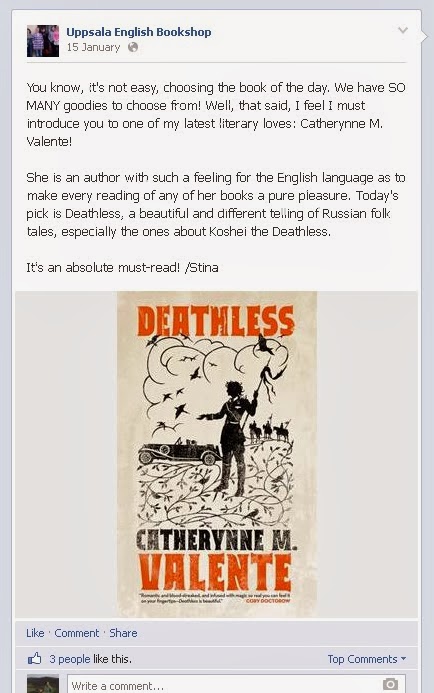 I promptly checked what the library had to offer and borrowed this (n.b. that I'm not naive enough to jump out and BUY it on any aul recommendation, no sirree): 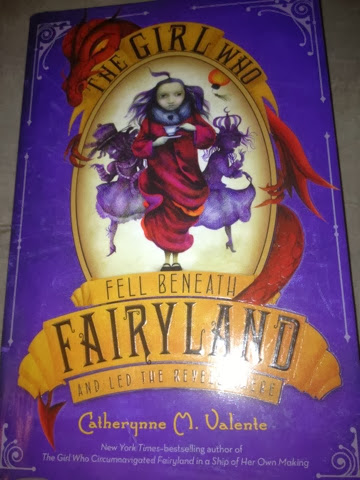 The recommendations are glowing. There are prizes that have been won, there are ecstatic reviews. "The kind of book you don't want to end" and so on.

Me, I don't get it. I think there are certainly some original and sweet ideas in Valente's version of Fairyland, but she seems a little too enamoured with her ideas because every character our heroine, September, meets holds a long quirky speech for her in a manner that quickly gets old. I don't really see that children would like this. Adults who fancy that they are in touch with their inner child will love this. It's like blogger pics of cupcakes and bunting, a bit pastelly and very artfully posed. "I love children, see how I've made them cupcakes!" Each scene wraps you up in so many words that you never get a sense of or feel for what the words are describing and what is actually happening in the flesh and blood story. Valente will write that something was terrifying but I never feel it. Everything is pretty. Unlike Gaiman's children's books with similar themes that have actual gore, this only glosses. Too clever. Jasper Fforde does this as well, loves his clever ideas so much he murders his book. No-one wants to read 200 pages of wordplay, bro. Anyway, book one might be better and this might just be filler, but I'm not going to go looking for book one.

Damn, this makes a long stretch of boring books. Meh.

No, no, no! I love Jasper Fforde's books. He does love his clever ideas, true, but I love what he does with them.

Sorry, just had to get that off my chest! I've not read any Valente, though I've heard good things about her stuff.

I'm pretty sure Koshei the Deathless appears in Gaiman as well. Can't remember where, now. One of the graphic novels? Stardust?

Lesi: Koshei the Deathless? I don't even remember this character now. I do admit that one of my many faults is reading too fast which makes me a sloppy reader, but I was a little bored with this one frankly so that's my excuse... Am turning to google, which gives me Wikipedia, which gives me nothing because it seems to be down atm - remind me to check back. But from what google shows it does seem like someone Gaiman would use, but wouldn't it be in the American Gods series?

Ela: I love and adore Jasper Fforde too, but he needs an editor he does. The final Thursday Next books are almost unreadable in my opinion, so many puns and so much wordplay it drowns the story! Which reminds me that I have a pet theory about British people appreciating this sort of humour a lot more than seems sane to us foreigners - a theory based most scientifically on an episode of Michael McIntyre's Comedy Roadshow or maybe it was Live at the Apollo? can't remember, anyway, there was a "comedian" there whose routine was purely puns and jokes, one after the other, and the audience laughed and laughed. And we did. not. get. it.