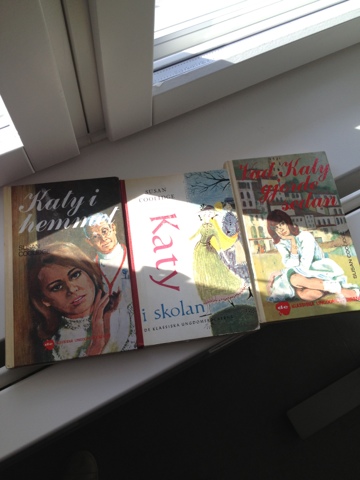 Ah, what everyone loves - a crap photo post! I really am the worst at photographs, I know. This one was shot in my window at work this morning while waiting for the computer to warm up, and you can just barely make out the covers, can't you? Mad skills.

I thought I'd given these books away. When we were moving, I agreed to let go of my collection of what in Swedish is called flickböcker and in English... I don't know offhand... books for girls anyway. The genre encompasses Little Women and Anne of Green Gables and Nancy Drew etc. Girls' series books? Google isn't being very helpful. Anyway, when I was little I used to go to a book shop on the way to church every week and spend my pocket money on second hand books, and a lot of these were girls' fiction about plucky good heroines and their adventures. I've held on to these books for years and years (with some very sparse culling), and finally agreed to give the final ones up last year provided my husband passed them on to his colleague who more seriously collects them. I'm so sure I wrote a post about this but I can't find it (maybe the post was in my head, sure I never get a proper chance to write these days). But he forgot! So I found them all in a plastic bag only the other day. Ha! And that prompted me to read them online as ebooks in English, because as you can see my copies were in Swedish.

There's so much written about Susan Coolidge's novels online I don't need to be elaborate. I've always been aware that they are classics even though I've never met anyone in the flesh I think who has actually read them, but for some reason I never actually bothered to look her or her bibliography up before. Therefore I was surprised to learn that the three I have are not the only ones about the Carr family. I didn't find a free copy of Nine Little Goslings online, but I found one of Clover, so I read that after re-reading What Katy Did, What Katy Did at School and What Katy Did Next. The photo shows my books in that order left to right. Note the cover art. The book in the middle, What Katy Did at School, has my favourite cover, and it was the only one that helped me somewhat place the books historically. The other two are much too modern and I remember as a child being mightily confused by these pictures when what was going on in the story was clearly happening a Long Time Ago (ca 1860s if you're asking). They are also fugly. I might get rid of these, nostalgia be damned, and look for copies in English instead. The middle one is pretty, and the colours and style do somewhat capture the books better.

I read these over and over. I wanted to be like Katy, loved and respected by her siblings and  everyone. I delighted in descriptions of Christmas boxes full of delicious treats for the boarding school, of pretty embroidered hankies and bouquets of flowers decorating every room. (As an adult I can see that Katy and her siblings are really much more interesting for the first half of the first book, before Katy is injured and reforms, but as a child I loved it all.) Any book with a description of a happy family was sure to seduce me of course (which meant that boarding school books were shoo-ins what with happy families at home AND happy family of friends at school - double win!).

Books like these have been derided for the message they allegedly send to young girls of docility, virginity and domesticity - but the problem isn't so much the message as the fact that only girls partook of it. The values (bar virginity perhaps, a value so taken for granted it's never even on the table for debate) are on the whole universal: be kind, be respectful, be neat, be considerate. The novels do in a way also stress what sort of values a woman should hold as ideal in a husband - and there is something refreshing about that in this shallow age where women are still taught to always keep looking for The One (man) but the brief on what he should be like focuses on his appearance or sexiness. Compared to what boys learned while reading Jack London (fuck him) this is grand.

Speaking of Jack London - I obviously can't plead enlightenment on behalf of these books when it comes to questions of race. I think I counted two black people in all four - nothing disparaging said or anything but they clearly don't count at all. The worst bit is when they are talking about an old school friend who is now a teacher in the Indian Territories and they discuss how no Indian would take her scalp what with that smelly pomade she uses. Charming, I don't think. At the same time it is representative of how white people actually did think at the time, and sure I'm always complaining about modern books about the past in which the authors can't bear their main characters to be unenlightened but instead write them as pro-integration, pro-gay, pro-everything about a hundred years before this is at all likely. No, this is what the past was like. If we're charmed by the old-fashioned values of gentleness and politeness we'll just have to be more civilized here in 2013 and extend it to everyone, won't we.

Sometimes they can be surprisingly modern. I've often seen, on Facebook or forums, people (women) sharing quotes from old housekeeping books aimed at new wifes; the type with helpful hints like "help your husband put on his slippers when he comes home, he is tired after a hard day at work". Okay, I made that quote up, but it COULD BE TRUE. Here is a quote from Clover, as they read aloud from one such book that Katy receives as a wedding gift:


It proved to contain a small volume bound in white and gold, entitled, "Advice to Brides." On the fly-leaf appeared this inscription:—
To Katherine Carr, on the occasion of her approaching bridal, from her affectionate teacher,
Marianne Nipson.
1 Timothy, ii. 11.
Clover at once ran to fetch her Testament that she might verify the quotation, and announced with a shriek of laughter that it was: "Let the women learn in silence with all subjection;" while Katy, much diverted, read extracts casually selected from the work, such as: "A wife should receive her husband's decree without cavil or question, remembering that the husband is the head of the wife, and that in all matters of dispute his opinion naturally and scripturally outweighs her own." Or: "'A soft answer turneth away wrath.' If your husband comes home fretted and impatient, do not answer him sharply, but soothe him with gentle words and caresses. Strict attention to the minor details of domestic management will often avail to secure peace." And again: "Keep in mind the epitaph raised in honor of an exemplary wife of the last century,—'She never banged the door.' Qualify yourself for a similar testimonial."
"[Katy] never does bang doors," remarked Amy, who had come in as this last "elegant extract" was being read. "No, that's true; she doesn't," said Clover. "Her prevailing vice is to leave them open. I like that truth about a good dinner 'availing' to secure peace, and the advice to 'caress' your bear when he is at his crossest. Ned never does issue 'decrees,' though, I fancy; and on the whole, Katy, I don't believe Mrs. Nipson's present is going to be any particular comfort in your future trials. Do read something else to take the taste out of our mouths. We will listen in 'all subjection.'"


There, you see - nobody appreciated those books. And young girls reading the Katy books could be told that they are full of nonsense even then.

When reading old novels like these it's so much fun to see how the people who lived then clearly thought that civilization had reached it's absolute apex. Miss Nightingale had reformed nursing with her modern ideas on hygiene and order, there were telegraphs and even telephones! steamers! trains that raced along at 30 miles per hour! Things could hardly improve after all this!

So I ended up bringing these to my book club, which has been dormant for a while. To reinvigorate it we decided to each talk about something we'd read since last time and then set a new date and pick a new book (it ended up being one by Denise Mina, could be interesting). I don't know if I converted/reinspired anyone to read vintage girls' fiction, but I did try... It was so good to see everyone again, all together. I'm looking forward to next meeting in October!