Christine de Pizan: The City of Ladies and Thorstein Veblen: The Theory of the Leisure Class

I'm putting these in the same post because I happened to read them back-to-back and found a similar theme. I started with The City of Ladies on 8th of March - International Women's Day - and finished with Veblen's two days later. Both books have been hailed as feminist literature, and reading them so close together sparked lots of comparisons in my mind. All brilliant, all very intellectual. Sadly, I can't remember any of them now, I don't think.

As testament to my scatty brain, I thought just now I'd read them as Ebooks, but no, I found them during the masthead/alphabetical organizing mayhem. Which I am too lazy to link to again. Mr Bani must've bought these, and I strongly suspect he did because they are so pretty. Our editions are from the Penguin series Great Ideas, and all the little paperbacks in the series have lovely lovely covers they do. I have shamelessly nicked these images now off the Penguin website: 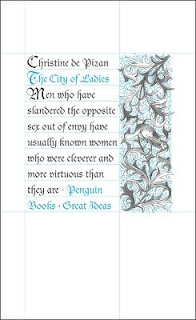 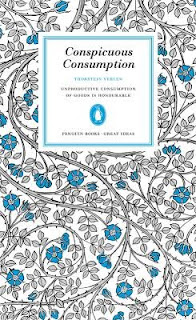 Aren't they goooorgeous? Frankly, I read them mostly because they were. We (mr Bani ...) have a few more from the series. A prime example of the troubles we book-owners have when sorting our collections - books like these should really be kept together, shouldn't they? Speaking of book sorting, I bought a magazine yesterday* on the way home (I was feeling sorry for myself, I'm sick and left work early, sat half an hour on the first bus, only to arrive at the railway station and discover that the 14.20 train was cancelled so I had to wait another half bloody hour) - Living Etc. it's called, and it was on offer. Sorry, apparently they like to style themselves Livingetc. Who'd have thunk. Anyway, one of the articles featured a house with loads of windows, so the owners had no walls for bookshelves, so they had "cleverly made bespoke bookcases" (oh how I am beginning to despise this ubiquitous use of the word "bespoke" in relation to anything not standardised) that wrapped around the back of their sofas. And, to get to the point, almost all the books in the bookshelves are those lovely classic Penguins with the orange and white covers. A few blues too. Very impressive stylish look, although one begins to doubt if the owners are seriously readers or just stylish collectors. When my youngest sister worked in a second-hand book shop she once had a customer who worked with interior design and who travelled the world buying old books with nice, leather bindings by the box-full. His clients just ordered libraries with a certain look, and he provided the right books for it. Never mind the content. I believe he told her that he'd sold drugs earlier, but this was more profitable and safer. She'll have to correct me in the comments section if I'm wrong. Anyway - a similar niche must exist for more design-savvy people who know that orange-and-white Penguins have the same effect but also mark you as a Real Reader™.

My quibble with the Great Ideas editions is that there are no introductions by learned folk. I used to hate introductions in my youth and childhood - just get to the book already! - but now I love them, I tend to learn a lot and they help me notice things I might otherwise have missed. These two books could have done with scholarly introductions in my opinion. de Pizan is too long dead to be widely remembered and needs to be understood in the setting of history, and Veblen was an odd-ball whose odd-balledness shines through in his writing and confuses, and needs to be set into perspective.

Back to the books. de Pizan is hailed by many as an early feminist, struggling against the misogyny of the times. The Wikipedia article I linked to there is written by clever people who write intelligently about her works, do read it (in lieu of an introduction, as it where). The story starts off when she, for diversion, picks up a book that a friend has left in her study. It's a popular book, supposedly funny, but she becomes upset at the prejudiced views of women she reads in it, the down-right hatred and dismissal of her sex. She prays to God to help her understand. She doesn't perceive women as bad, but so many learned men seem to think they are - surely so many can't be wrong or deliberately telling lies? She is then visited by three Ladies, of Reason, Rectitude and Justice, who help her to allegorically build the City of Ladies - to dig away the mud (the false opinions and lies), to lay the stones (stories of women of virtue, sense and holiness) and to fill it with female citizens (starting with the Holy Virgin and including Christine's patroness). It is a very clever construction, and I was struck with the realisation of how much more difficult it must have been to write a story like this back then - everything carefully scratched out by hand, no cheap paper to try out drafts on.

For a modern reader however, her arguments are awfully un-solid. Logic and deductive reasoning have developed since the Middle Ages, after all. To "prove" that women don't deserve to be maligned she relates, endlessly (thankfully the book has undergone some serious editing so many of the stories have been taken out), the biographies of famous female characters in mythology and history. And mythology = history, mind you. This may have been overwhelmingly persuasive in 1405 but not so much now, I don't think. She is also trapped in the conventions of her times, meaning that she is ready to exalt virtuous women who stay within the fold and condemn the harlots who stray. As usual there is a contradiction in place when a woman who clearly is not performing solely those duties to which women according to her own creed are pre-ordained and eminently suited yet chooses to uplift those values and push for every woman to conform to them (and this carries on today, with all those evangelist women in the US for example, touring the country saying that a woman's place is in the home). Yet I sometimes see a difference in writing style. At times de Pizan is more ascerbic and cutting, and then it seems as though this might be a more revolutionary, free-thinking woman shining through, while the more monotonous praising of chastity and loyalty to the hand that beats you is what you have to write to avoid being burned at the stake or something. Then, of course, humans are complicated and can hold many conflicting opinions. Most people never get a chance to sort those out. Well worth a read anyway. You can skim the boring mythological stories if you really want to.

Veblen is a different type altogether, a type that confuses people still today it seems. The cover of the book claims this to be a satire, and indeed that particular label seems to pasted on quite often. Veblen himself, according to various things I read online is mostly called an economist, but by chance I was re-reading Bill Bryson's Made in America the other day and he mentions Veblen in it, saying "the sociologist".  Which I like better, because even though Veblen himself wanted The Theory of the Leisure Class to be taken as a serious book on economics I think it works better if you class it with sociology. In any case it's an odd mix. It's too satirical and un-scientific to be taken seriously as a work of scholarship (although what standards they had in 1899 I do not know), but as a plain satire it fails too, because, not being intended as one it lacks the necessary punch. Also, the man just simply rants too much for comfort. He was one angry man. He does rant with some style though, I'll admit that.

Veblen is credited with feminist ideas too (theme!). When defining conspicuous consumption as consumption that is essentially wasteful, that has no practical use, but only serves to elevate the consumer's status in the eyes of others (look at him, he's so rich he can afford a golden toothbrush/doesn't have to work or whatever), he says that in our society women are essentially chattel or goods, used to elevate the statuses of the competing males. I found it clever, but am a little bothered because I found a lot of his other arguments and reasonings flawed and unscientific, as I've said - so am I only liking this because I can agree with it? What does this say about my powers of logic and deductive reasoning? Well worth a read! But don't expect a satire, it isn't enough of one to please all the way through to the end.


*Plz note that yesterday doesn't mean the day before the day of publishing, due to my cunning plan to write like a madwoman on my sick day and schedule the publishing of a series of posts, so I can look like a Real Blogger™.
Posted by bani at Sunday, April 03, 2011

*puts on Hat of Longwindedness +5*

Well, I barely remember the truth myself nowdays.

I remember standing outside (as in "outside in the fresh air") the storage room with the Boss and him and going through box after box of random books; I can't remember now if he WANTED half-bindings or not but the word "half-franska" is now burned into my memory.

Anyway, he said something about how when he was younger he was involved in drug trafficking - I think it was the heavy kind, like cocaine - but then he went into selling books to people who wanted their bookshelves to look nice and educated, because it not only paid more but it was legal and safer. I don't think he was an interior designer though; he just provided the books.

But basically you got the story right =)

You make yourself sound like someone who's done a lot of hard drugs. :P Thank you for popping in to confirm the true story. :D

Lol, does cookies count? 'Cos that's my drug of choice; chocolate for preference. =P