All I read before and during Christmas 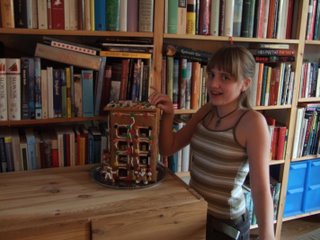 Allow me to start with a photo taken by my youngest daughter of my eldest daughter, posing with the gingerbread house we assembled on Christmas Eve. It's quite crooked (mea culpa) and the photo isn't too great (sua culpa, but sure she's only nine and a half and anyway I can't work the camera at all). Also available in photo for perusal - a sample selection of our books. See those big white volumes on the left? The Polish dictionary? My husband lugged those home from Poland years ago, unwrapped them, and discovered that a huge section of the P:s is missing. But we still keep it, because all the other letters of the alphabet are there, and every few years he looks something up.

A rather unique story, as the detective part is very much by-the-by. The main character is a celebrated actor, who has cause to remember how he once started out during the War. He is a ruthless person, who for the sake of his art uses people around him as he wants, and drops them as soon as they can't serve him any longer. One of the few people he genuinely liked, the black servant Samuel, apparently killed himself during the war, but the actor has always known he was murdered. He just chose not to mention any suspicions for fear of jeopardizing his budding career. So the novel is about the events leading up to the murder, but it's not about the crime per se, or solving it. It's well written though - also, it's another of Dickinson's racial tension novels; this seems to be a theme with him.

Oh, I do like a Josephine Tey. She didn't write nearly enough. I thought this was another detective story, but it's not. However, since someone bursts out with "oh, it's a wonder no-one murdered Father long ago" somewhere in the first third of the book I really thought there would be a murder later on for aaaages, but there wasn't...

It's a lovely "period piece" about two siblings who, independant of one another, get involved with another brother and sister from a higher class of society. Tey captures the 1930s ennui of the upper-class youth beautifully. It's in some ways a very modern book, as we in general don't expect an author of this age to be so outspoken. There is a reference to someone trying cocaine now, the new thing. Also

She had four absorbing interests in life: contraception, the price of boiling beef, the rent money, and the Duchess of York.

"Some of my best friends are musicians. It's the crowd who hang around them I can't bear. Perhaps camp followers are always a despicable bunch. Even a prostitute is better than a pimp, I suppose. [...]"

The poor siblings are tormented by their choleric, religious, hypocritical father, and are desperate to get away, but remain under his roof for the sake of their mother. Women's rights are an important theme, and independance in general. It makes one sad to think that the war was only eight years away.

This is the Dame's last novel, she died that very year. It's a novel mostly about Macbeth, with a murder at the end. But Macbeth is at the centre of things, in particular theatre production of the play. It's very charming, because her love of Shakespeare and theatre shines out on every page. We revisit the Dolphin theatre, a theatre than reappears frequently in her books, and even Pergrine Jay, whom we first met as the budding playwright in Death at the Dolphin. Now he is a respected director and owner of the place. It's a fine end to a distinguished writing career.
Posted by bani at Tuesday, December 26, 2006